Belo Horizonte, a Portuguese name meaning “beautiful horizon”, is the third largest metropolitan area and fifth largest city in Brazil; capital of Minas Gerais state, Belo Horizonte is a place of intense economical and cultural activity. It has a great infrastructure for national and international events. The country annually receives great amounts of visitors, as it is in the Brazilian main economic axis with regional influence even on regions of other states. Both multinational and Brazilian companies maintain their headquarters in the city. The city is nowadays renowned for the contrast between contemporary and classical buildings, being in fact the location of many modern Brazilian architectural icons, most notably the Pampulha Church. Annually, the city hosts the FIT BH, The International Theater Festival of Belo Horizonte, which attracts artists from all over Brazil and many parts of the world. 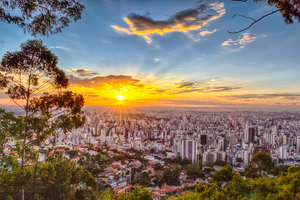